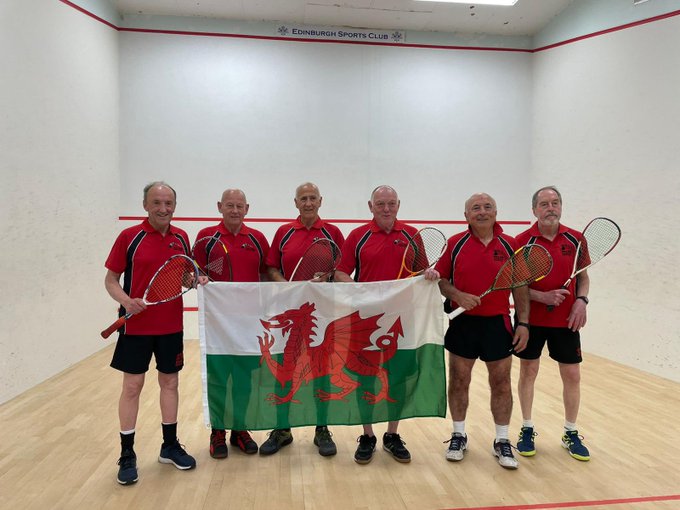 Moving into the second half of the Masters Home Internationals Tournament, Wales have had some good wins and strong performances under our belt. The Women’s Over60’s team took the trophy on week 1 in Ireland, with the Women’s Over35/40 coming in second place. Just imagine the energy the players are going to bring (on and off the court) for the final weekend of the tournament taking place in Cardiff.

Thank you to the Men’s Over70’s team who have reported back on their matches during their time in Glasgow, Scotland last weekend (6th-7th May 2022). Want to know how they got on?

At 3rd string Richard Ford and Seamus Daly fought out a high quality and close match where every game ended 12-10 or 11-9. Fortunately for Wales, Richard won them all to run out a 3-0 victor.

The number 1s certainly lived up to their billing. Captain Tony Bevan went 0-2 down to the classy David Gotto, then decided that attack was his best form of defence. He pulled off some remarkable winners to all corners of the court and ground out a fantastic 3-2 win!

Wales number 4, Geoff Perrett, was too strong for Ireland’s John O’ Shaunassey and ran out a 3-0 winner which meant Wales would win the tie. Well done, Geoff!

This took the pressure off Clive Morgan at 2nd string and he was able to relax a little and play a more sensible game than usual and close out a 3-0 victory. Tie to Wales 4-1 and great performances from everyone.

At 5th string, Peter Steed and Martin Day looked evenly matched, but Peter’s injury layoff and consequent rustiness were a significant factor in his 0-3 loss.

At 3, Richard Ford started strongly against Barry Featherstone, winning the first game. Barry then raised his game and came out the winner 3-1 in a tightly fought match, but well played again, Richard.

Tony Bevan again put in a great performance at number 1. He won the first against Ian Graham and, after losing the second, could easily have won games 3 and 4 which both went to the wire. Unfortunately he didn’t, so match to Ian 3-1, but a quality effort from Tony.

Geoff Perrett got involved in a very scrappy affair against Peter Smith at number 4, eventually losing 0-3 in a match he might have won by keeping things tighter.

Clive Morgan was no match on the day against Terry Belshaw at 2nd string. He was always playing catch-up and showed just how punishing it can be if you hang back too far on the court.

Richard Ford looked a match for Alex Evringham, but the Scottish number 3 pulled away to win 3-0.

Tony Bevan scored our first point of the tie against Ian Ross but Ian proved just too much on the slow court and ran out a 3–1 winner.

Things got no better when our number 4, Peter Steed, suffered a recurrence of his calf injury during the warm up. He battled well but couldn’t move well enough and went down 3-0.

Clive Morgan encountered a killer masterclass from Emilio at 2nd string and, although trying everything to neutralise it, couldn’t avoid a 3-0 defeat.

So, a weekend that started so positively ended with big losses to two very strong teams and a final position of 3rd. All matches were played in great spirit and the social side of the event was as terrific as always. Many thanks to Squash Scotland for hosting the weekend.

HOW PLAYING SQUASH CAN HELP TO OVERCOME LONELINESS 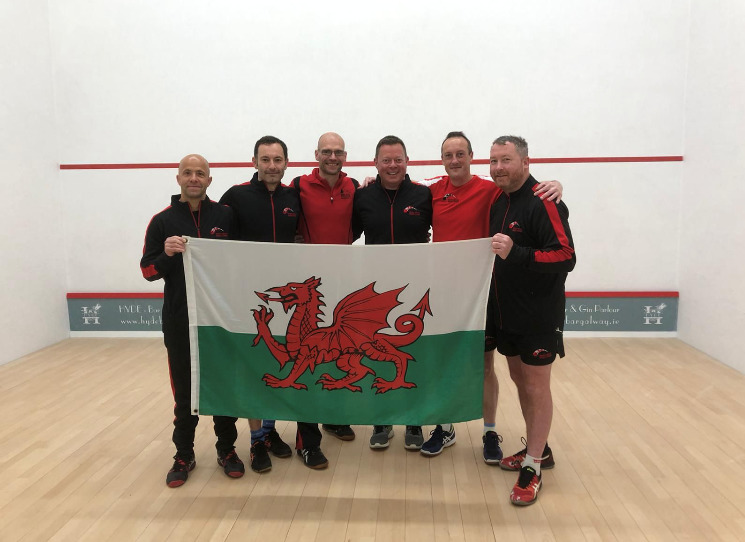