There are only 3 men in the o75 teams, however for insurance we took 4 to Nottingham on May 13th. At our age who knows what will transpire!

First match was against England, a formidable team consisting of the British champion and 2 ex world champions. Hopes were high but fingers were crossed! First up was Peter Kerry vs Chris Ansell and although Pete put up a good fight, he was outclassed by the very experienced Chris 3-0. Next up was Duncan Jones vs. James Dubois the British champ. A similar fate awaited, Duncan losing 3-0. Last up was Leighton Jenkins vs. Adrian Wright, not as young as he was but still a formidable opponent. What a great match! Leighton managed to win the first 13-11 in determined fashion. He kept up the intensity and will to win against a great champion and prevailed 3-0. To be honest we did not expect to beat England but were very happy with the end result.

Day 2 Saturday morning we played Scotland, determined to win at least 2 matches and gain the 4 bonus points. A fresh Geoff Trenchard was up first vs the Scottish stalwart Ken Reid. Geoff started off well, winning the first 2 games. The 3rd game went to Ken as he found a way round the cunning game of Geoff. The match went to the 5th where Geoff was pipped at the post 11-13. However, 2 points to Wales. Second up was Duncan vs. Dave Brown. A tight first game was won by Dave but Duncan then upped his game, fortunately making fewer unforced errors, and after a close 4th game won the match 3-1.

Last up was Leighton vs. Andrew Duff. Could he keep up the relentless intensity from yesterday? Very much so, the will to win very much alive, leading to a 3-0 win. The match was ours, 3-1.

Saturday afternoon we played Ireland who had beaten Scotland the day before but lost to England in the morning. It was all to play for if we were to be the tournament runners up. We had to beat them! The atmosphere was palpable as Geoff went on court to play Ireland’s Barry Cullinane. The first 2 games went to Geoff who was just too wily for Barry. The 3rd game was an epic, eventually won by Geoff 17-15 in a nail-biting finish. 1-0 to Wales, one more match needed. Next up, Duncan vs. Ciaran Roche. This match was to and fro, leading to a fifth game decider. Duncan won a string of points to be in what should have been a comfortable winning position. However, the tables were turned and Ciaran then won his own many points in a row to take the game 12-10. A big disappointment, but all was not lost! Apologies to the gallery and especially Leighton, who by all accounts had suffered a heart attack, a mini stroke and an apoplectic fit during the final points of the match.

Last up was, of course, Leighton who was carrying the burden of having to win if we were to beat Ireland. He was to play Frank Fahey, and, having mostly shrugged off the drama of the previous match, won the first game a very close
12-10. However, he seemed to be in the zone and won the next 2 games convincingly. Phew! We were the runners up.

What a great result and a most enjoyable weekend, finished off by the dinner disco on Saturday night. I’m proud to say that all four of us o75s showed the youngsters how to shake a leg on the dance floor.

It was an honour and a privilege to play for, and be Captain of, the Wales o75 team and many thanks to Leighton, Geoff, and Pete for their always optimistic outlook, determination, and friendship.

Thanks also to Nottingham Squash Club and England Squash for making this such a memorable weekend. 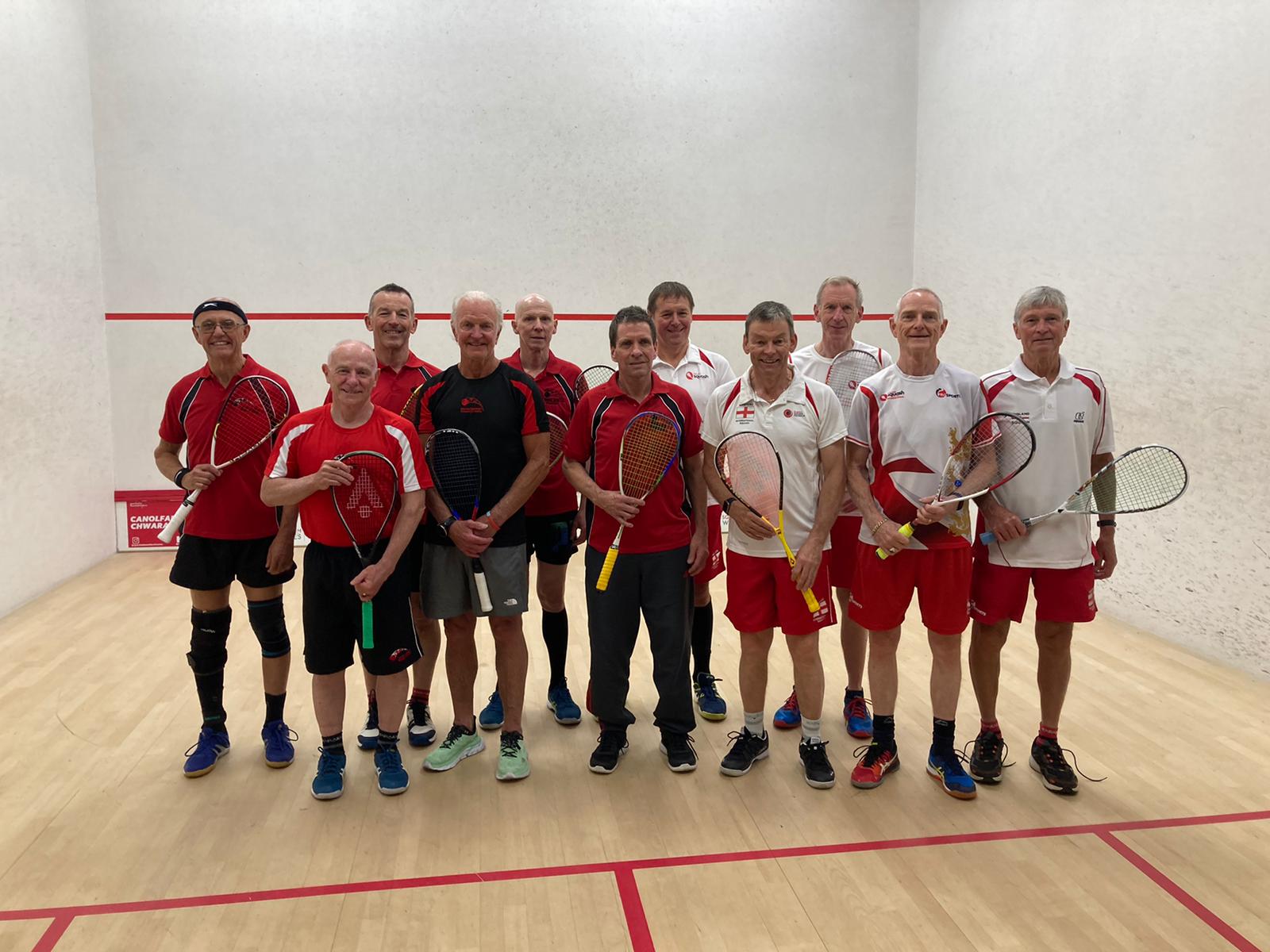 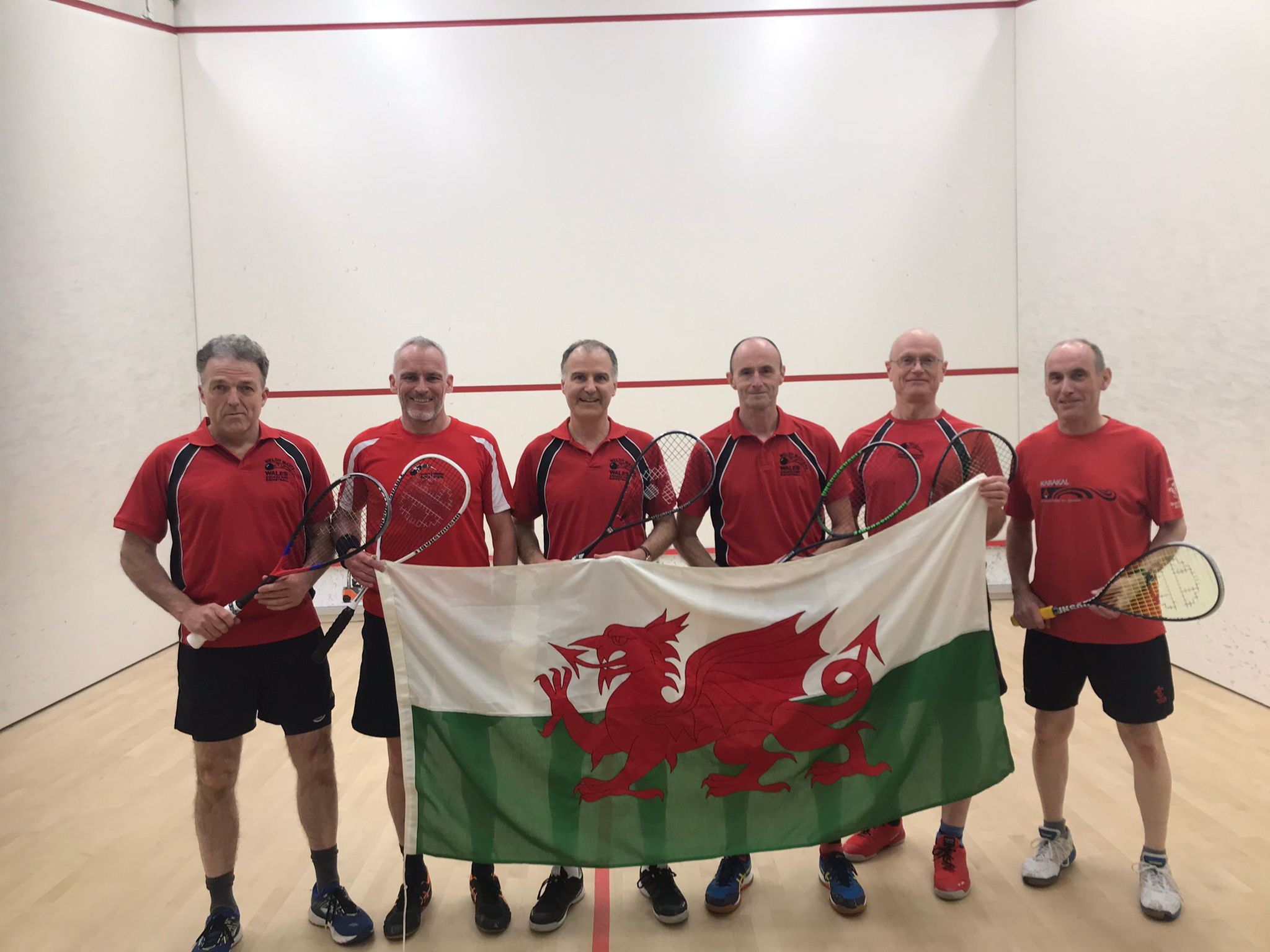