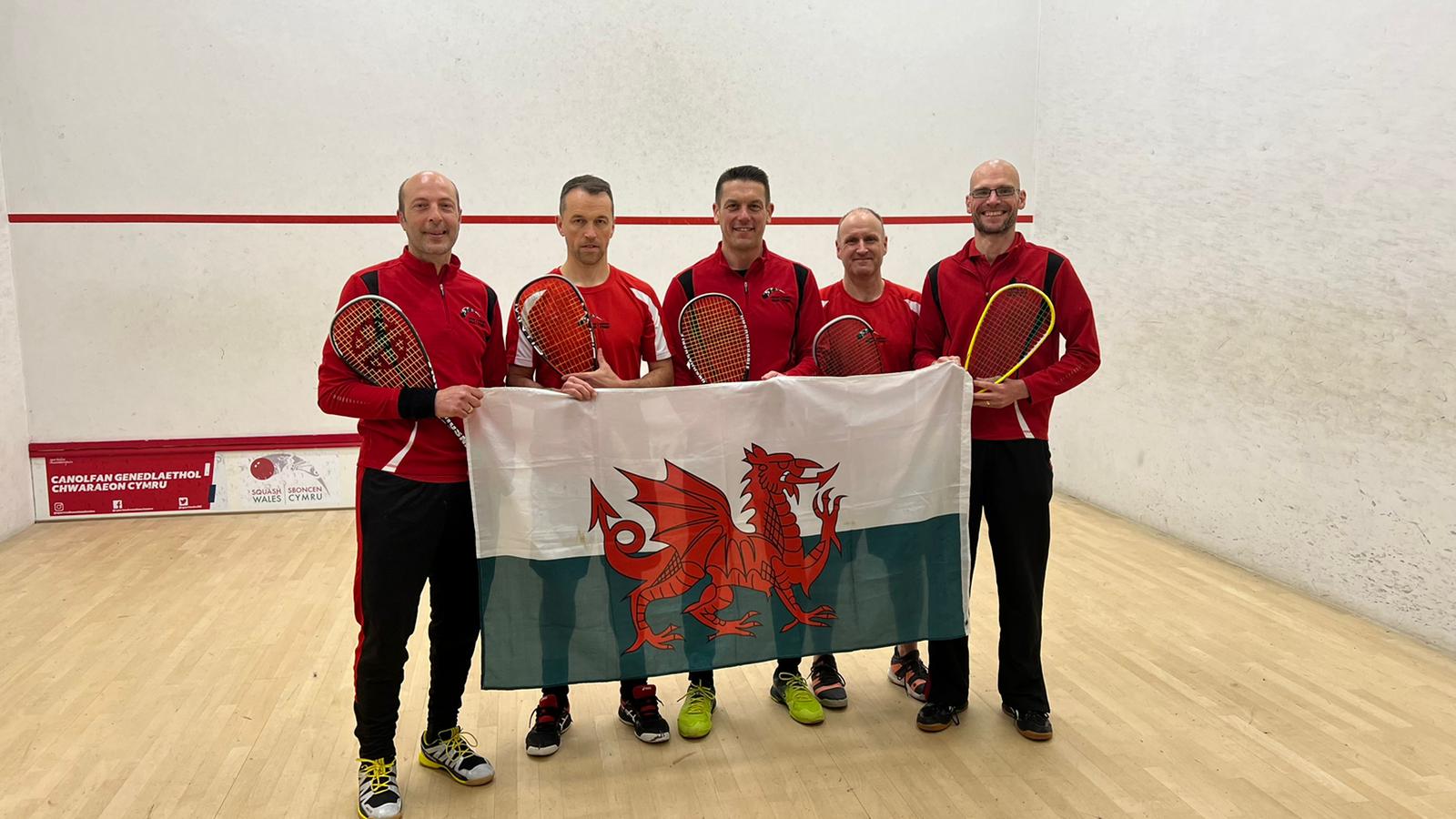 The men’s O45’S squad consisted of Andrew Neal, Paul Barrell, Dallas Hayvice, Dave Robertson, Simon Kilshaw and Richard Tailby. For most of us it was the short trip to the national sports centre in Cardiff (not the glass back at Cardiff squash club) apart from Paul Barrell who has for some reason decided to live in the far top left corner of the country.

The first match was at 5pm on Friday against Scotland. After seeing the named squads earlier in the week, we knew that the quality of squash from the opposition was going to be of a very high standard. We can do it boys was the chat on the WhatsApp group! We decided to meet (apart from Barrell who was making the long journey down from North Wales with the team flag) at 15:30 to practice before the first match. After thoroughly enjoying blasting the ball around for an hour, our first match was due to start.

We all got ready for the team photo on the glass backs at the national sports centre (not Cardiff squash club) and realised we were missing a team member. No Barrell, no flag, no team photo! First on against Scotland was Richard Tailby for the number 5 string match against Peter Buchan. With the first game evenly placed, Richard won the all important last two points to take it 11-9. Peter started the next game with some great drop shots and built an early lead to take the second game, which gave him the confidence to kick on and win the match 3-1.

Next on was the number 3 string match between Dallas Hayvice and Keith Simpson. After some hard hitting in the first game, Keith took it 12-10. Early on in the second whilst lunging towards the front corner, Dallas pulled his Adductor (hamstring, cheese string or whatever you want to call it). Despite being injured, Dallas put up a real fight and gave his all, but ended up losing 3-1.

The number 1 string match was between Andrew Neal and Simon Boughton. Simon took a close first game 11-9. With many holds and taxi’s in the second and third, (I’m still looking for some of them) Simon took the next two convincingly, and the match 3-0.

Next on was the number 4 string match between Dave Robertson and Richard Campbell. After the warm up, it looked like they’d need a new ball due to the ferocious hitting of both players. Both players had similar styles, but on the night Richard was the more accurate and stormed to a 3-0 victory.

Last on was Paul Barrell against Stuart Ayton for the number 2 string match. Could Paul prevent the whitewash after the long drive? In the first game there were some really long rallies, with Paul using the back wall as much as the front. Stuart went on to take the first game 11-7, which gave him the confidence to take the next two and a 3-0 victory.

A heavy defeat in the first match. Things can only get better, surely? After the match, we had a fantastic buffet at Cardiff squash club (thanks to Nic Birt & Lloyd Forkan) and arranged to meet at 9am on Saturday morning for our match against Ireland.

Due to Dallas getting injured the night before, we had to make some adjustments to the team.

Before the Ireland game we had a team photo, but this time without Dallas. Who knew that these team photos would cause such an issue!

First on against Ireland was the number 5 string match between Richard Tailby and Ryan Crossman. Not sure what Richard had eaten for breakfast (5 Weetabix is my guess) but after winning a narrow first game 11-9, Richard won the next two very convincingly to win the match 3-0 and get us off to a fantastic start.

The number 3 string match between Dave Robertson and Neal Murphy was next on. Neal was fastest out of the blocks taking the first game 11-2. Although the next two games were much closer, with Dave finding the back corners and putting his opponent under pressure, Neal went on to win the match 3-0.

Andrew Neal against Steve Richardson was the number 1 string match. With the first game evenly poised at 8-8, Steve played some really tight squash with Andrew giving away three strokes for Steve to take the first game 11-8. The next game was far more one-sided and Steve went into a 2-0 lead. Andrew totally changed his game and actually played some shots (first time for everything) to take the third game 11-1. Steve stepped up winning the fourth, and a 3-1 victory.

Next up was Simon Kilshaw against John Hurley for the number 4 string match. Simon playing his first match of the weekend, lost a close first game 11-8. John totally commanding the T in the second and third games, stepped up the court to take the second and third to win 3-0.

Last on was Paul Barrell against Dara O’Flynn for the number 2 string match. Barrell realising that Dara had played in a very long match on the Friday night, kept the ball going trying to wear down his opponent. At two games all, and again many a ball played off the back wall, it was neck and neck until Dara pulled away in the latter stages of the fifth to take it and win 3-2.

Another loss but a much better performance. In two hours we’re playing England, who needed to beat us to win the event. This time we were on the hard back at the national sports centre.

First up for the third time this weekend was Richard Tailby against David Gouldby for the number 5 string match. David stormed into an early lead taking the first game 11-0. Between games Richard asked “what do I have to do to get a point”? Play some shots was the answer. Richard hit a few winners early on, but David stepped things up taking the next two games convincingly to win 3-0.

Next up was Dave Robertson against Paul Boyle. Paul controlled the T against Dave with some lovely controlled squash on a very warm court. Dave dug in, but Paul was always a few points ahead. Paul won the first game 11-5, and carried on with his drops and lobs to take the match 3-0.

The first string match was between Andrew Neal and British O45 champion Matt Holland. Matt controlled things from the start with some quick fire boasts, and flicks down the backhand wall. Matt didn’t take his foot off the pedal, and although there were some long rallies (he had me on a string) Matt went on to win the match 3-0.

Next on was the number 4 string match between Simon Kilshaw and the England captain Joss Hargrave. Joss with his go go gadget arms seemed to stay on the T for the duration. Simon tried everything but Joss controlled the middle of the court, taking the first game 11-4 and the next two convincingly to win 3-0.

Last match of the weekend was the number 2 string match between Paul Barrell and Mike Gregory. Mike with his sublime racket work was always placing the ball in the opposite corner from where Barrell was. Flick after flick, it was very difficult for Barrell to get any court position. As expected Barrell never stopped running, but Mike let his racket do the talking, taking the match 3-0.

After the matches had finished and a few hours had passed by, the team met at Cardiff squash club for a swift pint before heading over to Jury’s in the city centre for the dinner and presentation. Some questionable attire on show I must say. Maybe I’ll start some fines next season. Thanks to everybody who made this weekend possible. Although we lost all three matches, everybody gave their all. A great group of lads who I know gave it their best representing their country. Can’t wait to do it again next season. 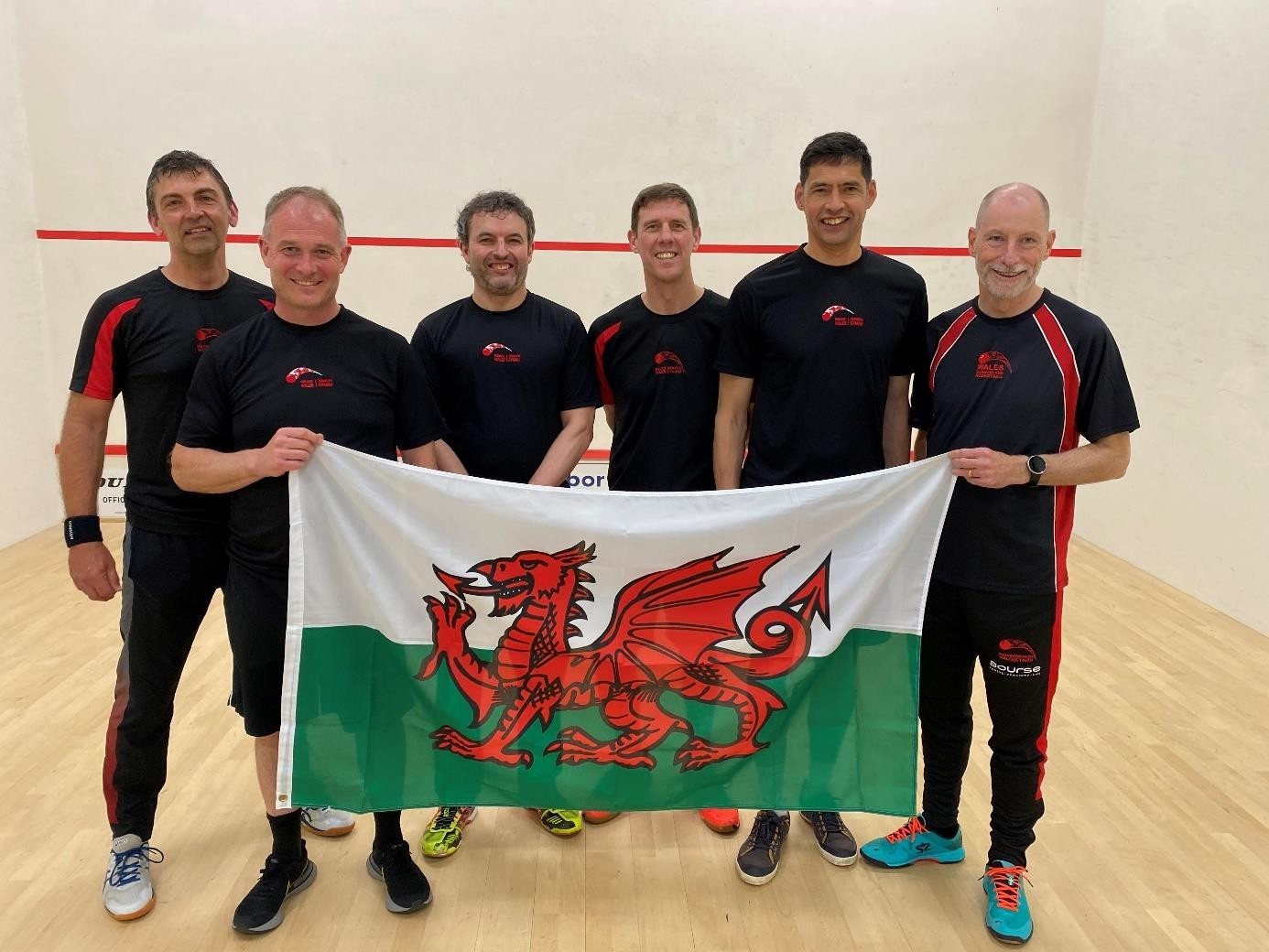